I know its late, but I really wanted to do this R Scatterdays. I had it all planned out before I went on
holidays, but I couldn't get it to upload. So here it is, hope you enjoy it.
The letter is "R" and the list, a mammal, technology, transport and something Red from the quilting/sewing room (the last one will always be quilt/patchwork related) 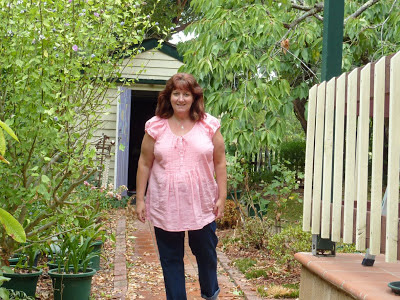 The Red Rover. This is my dad with his 1947 Rover. He purchased a Rover like this when he arrived in Australia in 1965, it was bottle green, then for various reasons in1974 he sold it . Then in the late '90's as  retirement was fast approaching he decided that he needed something to keep him little occupied and decided to find himself a Rover to 'do up'. Well, to cut a long story short he found a Red Rover that was already 'done up', he fell in love it, he ummmed and ahhed for a few weeks, went and another look at it, and on closer inspection (under the hood) discovered it was "his" Rover, well that was that, he had to have it!!
Mum says it's the "other" woman!! 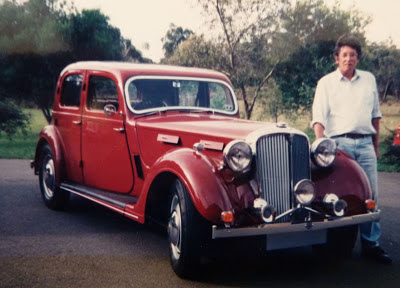 The Radio and Remote 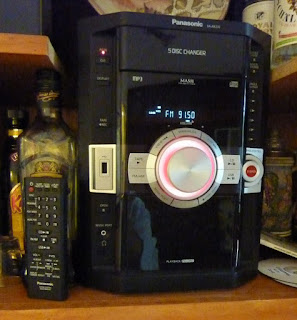 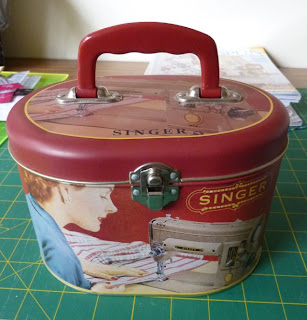 See you next Scatterday

Better late than never Ramona. Love your mammal......ha.ha. Very good. Also the Red Rover, they don't make them like that now. Lovely set of photos.

Nice to meet you, Ramona!

I love the story about your Dad's Rover. It is a beautiful car, and how could he NOT buy it back when he realised it was his?

I totally agree with your dad..he HAD to have that 'other woman'. Love your red tin..but then I'm a must have lady with great looking containers.

I totally agree with your dad..he HAD to have that 'other woman'. Love your red tin..but then I'm a must have lady with great looking containers.

Lovely of you to join us in this fun challenge that Cinzia has cooked up. It's nice to put your face with your name. Lucky you to have such an easy "R"! I bet you'll find, like the rest of us, that "Q" isn't quite that easy. See you next Saturday!

As Joy said, better late than never. Love your Dad's red Rover and your mammal. My DH just had to buy his grandfather's car when it came up on auction so I know how your Dad felt.

Leave It To Davis said...

Well, you just made me go, "wow!" when you said it was his green rover...that is the coolest story EVER!!! I mean, what are the chances???

That first photo reminded me of a poem by Robert Frost:

The gaps I mean,
No one has seen them made or heard them made,
But at spring mending-time we find them there.

Ramona
I live in Upwey, in the beautiful Dandenong Ranges in Victoria, Australia. I am married to Theo (pronounced Tao) and have 2 adult children, DD Laura, and DS Justin and our two kitty cats Luna and Flint. I love life, and enjoy the simple things that it has to offer.